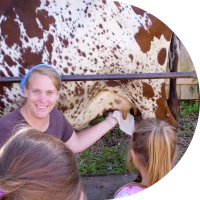 If one were tasked with assigning a single word descriptor to Lawton’s Family Farm in Foxboro, MA, that word would almost certainly be synonymous with perseverance.  The farm has been in the family since 1732.  The once enormous property is now a tiny fraction of its original size and finds itself the last remaining dairy in Norfolk County.

Given Foxboro’s proximity to both Boston and Providence the loss of farmland and dairy farms in particular should come as no surprise.  The number of dairy farms in Massachusetts – as in much of the country - has been declining for years.  This long running trend is nuanced, but especially fueled by high land prices, decreasing amounts of agricultural land available due to development, declining farm profitability and the lower costs of land and farming in more rural states. These factors reduced the number of dairy farms in Massachusetts before economy of scale impacted the dairy industry. These factors still pressure many dairy farmers to leave the business.  The high rate of attrition amongst dairy farms is a well-documented story, but less consideration has been paid to the alternative marketing and value-added strategies that can effectively keep these farms not just operational, but profitable.

Enter Terri Lawton and a story of teaching an old farm new tricks.

Terri grew up on the family farm – which is not the case for an increasing number of new and beginning farmers – and headed west to Indiana to study at Purdue University.  In 2002, Terri graduated with a double major in Animal Agribusiness and Agricultural Communications.  Despite the clear agricultural focus of her studies, Terri spent a year volunteering in Americorps’ Vista program before returning to farm-related work and taking a job as a dairy inspector for the state of Massachusetts.

While inspecting dairy farms Terri helped to ensure the safety of the state’s milk supply, but also learned about the rising popularity of raw milk – something she had yet to consider despite growing up on it herself.

After being a Dairy Inspector, Terri wanted to return to the family farm. However, she wanted to earn a living wage, and wouldn’t have been able to do that without using some sort of value added marketing.  She was very familiar with how to make clean raw milk as well as other dairy products. With the closest grass-fed raw milk dairy more than an hour’s drive further west of her parent’s farm, it was a recipe for success for Terri to begin selling raw milk.

She took the first step in 2006 starting Oake Knoll Ayrshires at Lawton’s Family Farm.  Milking two cows which had been in her parent’s dairy herd, Terri launched her raw milk business.  While the laws concerning the sale of raw milk vary from state-to-state, even town-to-town, in Massachusetts, on-farm sales are permitted for licensed producers.  Raw milk retailers must meet higher sanitary standards and are governed by regulations beyond that of dairies that supply processors.  The farm’s milk is tested monthly with formal inspections every 6 months or more frequently.  Terri was able to capitalize on the experience and perspective she gained as an inspector to develop a safe and sanitary raw milk program.  As she says, it provided the “understanding of food safety [necessary for a] very effective cleaning and sanitizing protocol.”

Terri also put the knowledge from both of her degrees into practice.  She started small, planning to grow her operation slowly to meet demand as it came and created additional revenue streams by simply practicing good farm economics.  When a cow is no longer profitable for dairy, the cow is used for hamburger, hot dogs, sausage and stew meat.  When a cow gives birth to a bull, the calf will be bottle-fed, set to pasture and turned into veal a few months later.  While it seems a matter of commonsense, not all farms practice such thrift, let alone see it as a methodical cornerstone to the sustainability of their business.   For Terri, the diversification of revenue sources is a critical component to the viability of her operation.

As with all business ventures there were some bumps in the road.  Going into her first season Terri sought advice from other farmers on how to price her products.  As a result she underestimated her production costs.  She was producing premium products, 100% grass-fed raw milk, beef and veal.  Regardless of how well intentioned and knowledgeable those giving her advice were, all farms have variable production costs, and Terri found herself with a shortage of operating capital.

Meanwhile demand for Terri’s product was increasing.  She was building a loyal customer base, but needed to reset her prices.  She communicated this need to her customers clearly and honestly, letting them know that she would have to raise prices to continue providing them with raw milk.  Her customers understood, providing a prime example of the benefits of direct marketing and relationship building.

Terri still lacked the necessary capital to grow her business to meet demand.  She decided to seek outside financial assistance through Farm Credit East's Farm Start program.  Participating in Farm Start - which operates essentially as a line of credit - allowed Terri to buy winter hay, grow her milking herd to 20 cows and purchase reusable glass milk bottles for the raw milk.  The funding was critical to the success and growth of the business as it provided her the working capital necessary to expand.

Since 2008, Terri has maintained a milking herd of twenty-four cows.  The cows need to be milked twice per day.  Meeting demand in a direct marketing model like Oake Knoll’s is complicated by definition, but furthermore in Terri’s case because raw milk must be sold within 5 days of bottling.  To address this Terri sells the milk by appointment only.  Any milk not scheduled for raw sales can then be diverted elsewhere.

The outlet for that excess milk came in 2008, when, without expanding the milking herd, Terri’s parents started Foxboro Cheese.  Terri and a hired cheesemaker take the milk not used for raw milk retail and make a fromage blanc and asiago for sale at the farmstand and at many Boston area farmers markets.

The farm has continued to evolve and prospered through the broadening of its revenue sources finding value-added uses for what some might consider by-product.  With raw milk, cheese, beef and veal enterprises the farm makes efficient use of its grass-fed herd of mostly Ayrshires.  That income is further supplemented through their farmstand, which is stocked with maple syrup, eggs, homemade soap, and seasonal vegetables.

Terri lists the American Farm Bureau Federation as a major resource in the progress of her business.  As chair of the Massachusetts Young Farmer Committee for 4 years, she benefited immensely from the many professional development and networking opportunities. In 2011, Terri was chosen to participate in the AFBF's highly selective Partnership in Agricultural Leadership program.  The advanced leadership development program teaches media relations, lobbying and public speaking skills while providing foundational knowledge of agricultural and public policy issues.

Terri is paying it forward while continuing the spirit of revenue diversification.  She recently began consulting and speaking to young and beginning farmers to help them develop financially viable businesses.  She believes that people can pursue their passion of farming without living in poverty.  As she put it, “there are specific ways of thinking and building farm businesses which can create an environment to foster profitability, and I help farmers understand how to incorporate these tools to ensure their success.  I want to help other people pursue their farming passion, without having to be poor.”

The dairy business is capital-intensive, and being a price-taker (as most dairy farmers are), often requires larger and larger farms to stay afloat.  With Oake Knoll Ayrshires and Foxboro Cheese - sister enterprises of Lawton’s Family Farm – Terri has helped find a way to make the farm financially sustainable and provide a useful model for dairy farmers seeking an alternative means of endurance.  Producing value-added products and diversifying your operations and marketing outlets is not easy, but offers a path forward towards a more civic agriculture, one that is intimately engaged with the community, but most importantly works for farmers and eaters alike.

2002: graduated from Purdue University with a double major in Animal Agribusiness and Agricultural Communications

2011: selected by AFBF for 1 of 10 spots in their Partners in Agricultural Leadership program