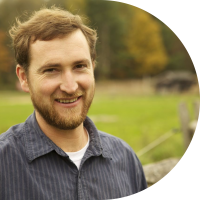 Only 12 years after first farming, Sean Stanton manages 140 acres of farmland on a dozen different properties in Great Barrington, Massachusetts. His grazing herds include dairy cows, beef, pigs, broilers, and laying hens. He also grows tomatoes, which he has found to be the most appropriate summer use of the laying hens winter greenhouse. Under the farm names of Blue Hill Farm and North Plain Farm, Sean sells over half his products to the famous Blue Hill Restaurant in New York. The rest is sold to local restaurants, farmers markets, and from an on-farm stand. Sean has an entrepreneurial vision and a diverse farm made up of multiple components.

After four years serving in the United States Coast Guard, Sean returned to Great Barrington, Massachusetts to spend more time with family, work and attend college. Good food had always been important to Sean’s family growing up. They liked to buy food from people whose name they knew. When Sean returned home he began buying fresh milk from Moon In The Pond Farm. As a cash-strapped college student Sean soon had drunk himself into a milk-debt of $160. Farmer Dominique Palumbo at Moon In The Pond Farm offered Sean a deal; he could work off his milk-money.

That was Sean’s first real experience working with livestock and he enjoyed the work. He helped with animal chores and soon found that his milk bill was paid off, but he still had a thirst for farming.

Sean wanted to learn more about where food comes from and there is no better way to learn then by doing. He was living on his parents land while attending Berkshire Community College and began to populate the 10 or so acres of empty land with livestock. First he bought, raised, and slaughtered 25 meat chickens, then got a few pigs, some laying hens, and a couple cows.

Sean had access to land and people who wanted to buy his products and his operation grew quickly. He attended NOFA Mass workshops and conferences, read Joel Salatin’s books on pastured livestock, learned a lot on the internet, and developed a mentorship relationship with Maple Shade Dairy Farm and other local farmers to learn more about raising dairy. By the time Sean considered a more formal farmer-training program, he felt that he was already too deep into farming himself.

Sean feels that a lack of a farming education can be limiting and there is something to be said for a formal training program. But he has also seen farmers become limited by formalized training, stuck in an idea of what is right and wrong, and loose their open minded experimentalism.

As Sean’s operation grew he began to farm on several nearby plots, including a piece of land owned by Project Native, a native plant nursery a few miles up the road. Though he has not yet worked with them, Sean looks forward to partnering on projects with the Great Barrington Land Conservancy in the future. When he saw open land, he approached the owners and proposed grazing livestock on their land. There are some difficulties that arise with raising livestock on multiple parcels. Some landowners do not want certain types of livestock on their land, and animals have minds of their own and can escape when Sean is not on the property.

After a few years of farming on his own, Sean met Dan Barber, the chef and one of the owners at Blue Hill restaurant in New York. Chef Barber visited Sean’s operation and had lots of good questions. He was clearly committed to understanding where his food came from and knew a lot about farming. During that visit Chef Barber told Sean about land his family owned in Great Barrington, and that they were looking for a farmer. Sean didn’t feel ready to take on another property, but began selling pork, chickens, and tomatoes to Blue Hill restaurant. A year and a half later Chef Barber offered Sean to farm the Berber family land again and he accepted.

Sean wrote a proposal for the various projects and operations he intended to establish on Blue Hill Farm. Today, seven years later, his operation looks very similar to what he first outlined. There is a small raw milk dairy with about 20 cows, pasture woodland raised hogs, 600 laying hens and a few other enterprises. The arrangement is such that there is no cost to Sean for use of the land other then maintaining a presence on the property and improving the soil and farm as a whole. Sean’s living is what he can make, or not, farming. Blue Hill Farm does not have housing so Sean and his interns live off the farm.

Sean hires two year round interns, two half-year interns and two additional interns during the heaviest summer months. The interns receive housing and a stipend. The learning they receive is experiential and in the field. In addition to interns, Sean has one assistant who is special needs and has been working with him for 11 years.

Sean wishes he had hired a bookkeeper early in his farming career. He noted the importance of recording and understanding what is going on with the finances of a business, as well as the importance of knowing and understanding one’s own strengths and weaknesses. For Sean, and many other visionary beginning farmers, it is easy to get excited about the potential of projects and loose site of the reality, especially the financial reality, of those enterprises. For people without a bookkeepers mind it is especially important to work with a partner or employee who has these skills. After his first few years Sean had a credit card bill of over $20,000, which is nearly paid off over a decade later.

When he first began farming, Sean went to the Farm Service Agency (FSA) office in Pittsfield, MA and was told that his project did not qualify for any of their programs at that time. A few years later, once his farm was a bit more established, another farmer suggested that he look into NRCS programs. Since then he has received financial and technical assistance from NRCS in developing a waste water system for his dairy, a nutrient management plan, and a gravel farm road. MDAR’s Tilling the Soil of Opportunity classes have been helpful for business planning, especially for an operation with so many different enterprises. Sean has also found the Berkshire Grown network valuable for connecting to other farmers and consumers. Recently the Massachusetts Department of Agricultural Resources (MDAR) has also had a major impact with the Farm Viability Enhancement Program. This program has allowed Sean to invest in additional equipment and infrastructure to make the farm a safer more efficient and more productive business.

In the future Sean is excited to find new ways to feed his animals and address the issue of not only knowing where your food comes from, but also where your food’s food comes from. His cows are already 100% grass-fed from pasture and hay on his farm. He hopes in the future to be able to feed his pigs and chickens with homegrown grains and forage crops.

Sean’s advice to beginning farmers is to do things you like to do. This may seem simple, but embarking on projects you truly enjoy is especially important with a job like farming that is also a way of life. Try new things. Don’t let other people tell you there is only one way to do something. Experiment and always keep an open mind. He encourages people to think out problems and plan systems ahead of time. For example, how are those pigs going to get loaded for slaughter in six months? Also challenge yourself to always increase efficiency. Reduce the time and labor needed to run your operation, even if it means investing in better and more expensive equipment. Money can be borrowed and paid back, but burnout is real and personal time and energy cannot be returned. Lastly, stay involved and active in the big picture. Sean always visits the MA State House on Mass Agricultural Day, meets his state representatives, and brings his governor a dozen eggs. It may not be wise to have all your eggs in the same basket, but a basket full of really great eggs can hatch new relationships to help farming thrive.

2001: Moved home to Great Barrington, MA, attended Berkshire Community College, and was introduced to farming at Moon In The Pond Farm

2002: Raised a few meat chickens on his parent's land, North Plain Farm. Soon he had a few pigs, layers, and cows

Hired interns to work on the farm properties

2005: Accepted an offer to farm Blue Hill Farm owned by the Barbers of Blue Hill Restaurant in NY

2008: Elected to the Great Barrington Board Of Selectmen

Every year: Goes to Mass Ag Day at the State House, keeps an open mind, does what he loves!