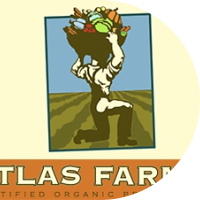 Started by Gideon Porth in 2004, Atlas Farm is an organic produce farm in South Deerfield, Massachusetts certified through Bay State Organic Certifiers - an accredited agent that certifies operations throughout the Northeast.  Atlas Farm sells direct to consumers at farmer’s markets in Boston, Amherst and Northampton and through use of the Community Supported Agriculture (CSA) model, as well as wholesale to restaurants, grocer’s like Whole Foods, value-added processors like Real Pickles in Greenfield and through unique distributors like Boston Organics.

Gideon grew up in Florida and attended the University of Michigan where he focused academically on biology and ecology and first took an interest in the plethora of issues surrounding food production.  While at school, he worked two seasons at the Community Farm of Ann Arbor, a small, organic CSA farm, providing his first hands-on farming experience.

After a season working for a farm in Tennessee, Gideon moved to New England.  In Boston he worked for two seasons at the Food Project – a decentralized, not-for-profit farm focusing on youth education and social change through sustainable agriculture.  Gideon worked both as an assistant on their farm in Lincoln and a year at one of their urban sites gaining an increased understanding of both production practices and the relevant social implications of food.

Knowing he wanted to farm, but lacking both startup capital and land, Gideon opted to pursue a masters degree from the Plant, Soil, and Insect Sciences Department at UMASS Amherst with his sights on a potential career in extension services.  The urge to farm did not subside with graduate education.  However, studying plant science under influential extension associate professor Frank Mangan equipped Gideon with a technical knowledge set that would become a valuable asset upon graduation when he decided to start Atlas Farm.

After finding some land through a friend who knew someone with 5 acres for rent near Montague, Massachusetts, Atlas Farm was launched.  The following season, Gideon found additional land in Deerfield via New England Landlink, and settled in the River Rd. neighborhood the farm still occupies.  For startup capital, he borrowed roughly $20,000 from his parents, enabling him to invest in some equipment and supplies to start the farm.  By, in his words, “running things pretty tight the first few years,” Gideon was able to cover the farm’s expenses after the first year and over time was able to pay back the loan from his family.

Since its creation in 2004, the farm has grown significantly, expanding from an initial 5 rented acres to the 55 acres currently under active production.  The farm dedicates the bulk of this acreage to their wholesale market, which comprises roughly 60 percent of their business.  As is common, the farm only owns 12 of the acres it grows on – with the remaining 43 acres rented from a neighboring landowner.  Despite the farm being spread across multiple parcels, the close proximity - about a ¼ mile - makes logistics fairly simple compared to more spread out operations.

The farm’s land-base expansion has been accompanied by numerous infrastructure improvements and the addition of new sales and marketing outlets.  Through grants from the Natural Resources Conservation Service’s (NRCS) Environmental Quality Incentives Program (EQIP) they were able to put in an irrigation line and updated water pump as well as receive technical assistance to implement a nutrient and pest management plan.  The farm was also able to invest in season extension as a means to increase production and extend the income period into the traditional off-season - an important aspect to the viability of many New England operations.  More recently, a biomass boiler was installed.  The boiler uses corn to provide a consistent root-zone heat in the greenhouse, enabling the farm to increase tomato production.  Adoption of such innovative technology augments the farm’s “beyond organic” production practices increasing annual output through the sustainable creation of a longer growing season.

In 2011 Atlas Farm started offering CSA shares, further diversifying their marketing approach.  The initial success of the CSA model led them to expand from 100 shares to upward of 400 for the 2012 season.  According to Gideon, the transition was fairly simple because the farm already had significant retail experience.

Atlas Farm has also benefited through their partnership with Community Involved in Sustaining Agriculture (CISA) – a local organization dedicated to scaling up local food production through marketing assistance and consultation.  CISA helps to facilitate wholesale opportunities between the farm and their business and institutional buyers as well as providing information to retail and CSA customers.

In regards to education, Gideon is quick to point out that farming provides constant learning experiences.  He credits his systematic method of farming to his time with Don Zasada, the former manager at the Food Project and sites the educational lessons gained from participating in the Eastern Massachusetts Collaborative Regional Alliance for Farmer Training (EMassCRAFT) as particularly formative.  Having set roots in the Pioneer Valley, the farm has joined an impressive network of growers – Doug Coldwell and Dewitt Thompson of Full Bloom Market Garden and Happy Valley Organics, Dave Jackson of Enterprise Farm and Gary Gemme and David Wojciechowski of Harvest Farm to name a few - providing a fruitful, if informal environment for continued learning.

In addition to these more ad hoc learning opportunities, Massachusetts’s farmers have access to numerous conferences and workshops through organizations like the Northeast Organic Farming Association (NOFA/MA) as well as the annual New England Vegetable and Fruit Conference.  Gideon points to these types of learning experiences as great opportunities to both network and pick up valuable knowledge.

He also acknowledges the benefit of financial advice, something he initially approached on his own, but has sense sought from outside the farm.  He credits a strong relationship with the Farm Credit Bank specifically for help with accounting, taxes, payroll, and lending particularly, which is a big piece in Atlas Farm’s continued success.

At present the farm is profitable which Gideon contributes in part to what he refers to as an “exceptional time” to be farming, referring to the favorable environment for local and organic food in Massachusetts.  This success enables the farm to employ 7 year-round employees, a fairly high number among typical small-scale organic farms.

While Gideon acknowledges that one might focus on fewer crops in greater abundance were profitability the sole end, the diversity of crops and outlets makes his farm business resilient.  By offering a wide range of products from raw produce to value-added tomato sauces and salsa, co-packing for a neighboring farm in Franklin and selling both retail and wholesale, the farm is able to defray vulnerability while keeping things interesting on the farm.  The willingness to adopt innovative production practices and market through various outlets gives the farm a competitive advantage.  Ultimately of course, the reason for the farm’s profitability lies with Gideon and his staff’s ability to grow high quality produce.